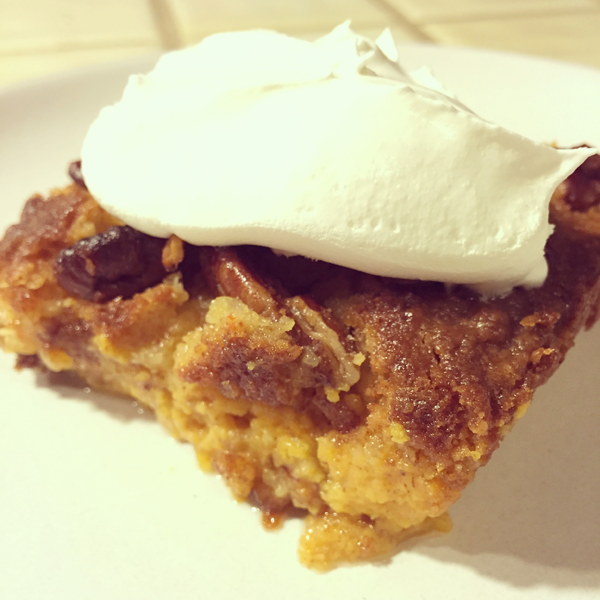 I’m getting excited about the holidays and Thanksgiving and all the eating!  I know we don’t normally talk too much about food and recipes here on the blog as I am no Susie homemaker.  But, I do love my food and seeing as Thanksgiving is more about food any pretty much any other holiday, I felt inspired to share my favorite Thanksgiving recipes.  Plus since we’ve already designed the table, we have to put some food on it now, right?

As a sometimes cook. occasional hostess, and a potluck friend, I have collected recipes over the years that I love.  I’m a big fan of trying new recipes to expand my horizons and my taste buds, but there are dishes that you cook over and over again because they are delicious, everyone loves them and they put a smile on your face.  They are tried and true and they are winners.  Like in the movie The Help, Minny’s chocolate pie is a winner, when it’s not containing poo of course.  So, I have two recipes that are my winners when it comes to Thanksgiving.  I love them, I could eat them all day and I always get rave reviews.  They aren’t complicated or fancy, they aren’t going to win any presentation awards, but they are what food should be, super yummy and homey.

Food to me always comes with a story, so this stuffing recipe is one I originally got from my Aunty Jan.  Thanksgiving for my family was always held at my Aunty Jan and Uncle Willy’s house, that was just their holiday.  My Aunty Jan is a cook, she likes it and she’s good at it.  Every year she’d make this stuffing which I just gobbled up.  I learned as I got older to just go minimal on everything else and heavy on the stuffing because it’s what I wanted my stomach space to hold the most of.  Stuffing became my entree and turkey, veggies, etc… were all just side dishes.  I always looked forward to it and it was always yummy.

After I went off to college and found myself away for Thanksgiving for the first time, I had to get the recipe to make it myself because to me, Thanksgiving without this stuffing was just unheard of.  I got the recipe and have been making it ever since.  I’ve adapted it over the years to make it more my style and what I like, but it’s still very much my Aunt’s stuffing recipe.  Since I tweak the recipe as I make it, I don’t have an exact recipe, but this is my closest approximation.  Feel free to add to it or adjust it to fit your likes and tastes.

1. Chop up your celery and onions.  They should be about even in amount once chopped.  If not, you can add more onion or more celery as you see fit.

2. Heat a large pot on medium high to high (depend on your stove) and add the olive oil.  I don’t have an exact amount I use, but just enough to go around the pot twice.

3. Once the oil is hot, squeeze the sausage out of it’s casings and then start breaking it up with a wooden spoon.  You want to separate it into small pieces.

4. Once the sausage is broken up and cooked, empty it from the pot into a bowl to sit on the side.

5. Put the pot back on the burner with the leftover sausage oil and turn the heat down to medium/medium-high.  Add the butter to melt.

6. Once the butter is melted, add your chopped celery and onions.  Stir it a bit from time to time. You’ll cook your celery and onions until they are cooked and soft, usually something like 15 minutes.  The onions will be easy to tell when they are ready, but the celery you may have to taste to make sure (yes, life is hard).

7. While the celery and onions are cooking, you’ll want to get your chicken broth/stock ready.  If you are using ready-made from the can or carton, then just open it and if you are making it using a concentrate, then take this time to make it.  I usually make my broth and when I do I usually make more than I’ll need just in case as I eyeball how much to add in our later steps.  So, I tend to go on the high end.

8. You will want to start cooking your bacon now as well whether that is via the microwave or in a pan to get it nice and crispy.  You can put as much or as little bacon as you like.  I tend to eyeball it and add what I think looks good.  If you have extra, then you can have a snack!  Or make a BLT.

9. If you have time between your broth, bacon, and onions/celery, you can also take this time to chop your parsley.  If not, you can do it later.  Once again I usually eyeball how much I put in my stuffing, so I’ll wash and chop two large handfuls and add as I need.

10. When the onions and celery are cooked, you want to add back the sausage to the pot and then add one of the packages of stuffing.  If your stuffing comes with a seasoning packet, just dump it as you won’t need it.

11. Stir the stuffing around with the onions/celery and sausage.  Then add the second bag of stuffing and mix everything.

12. Now you add your chicken broth.  So, what I do is I add some and then stir, add and stir.  The idea here is that you want to get the stuffing moist so that the stuffing cubes soften.  You don’t want to go mushy here, so be careful how much you add and how fast to make sure it’s even.  Some people like their stuffing drier, others wetter.  You can figure out what makes sense for you. Give it a few tastes as well if you aren’t sure.  I tend to use the entire 4 cups.

13. Once the stuffing is at the consistency you like your stuffing, it’s time to add the bacon and parsley.  You will need to chop up your bacon and your parsley (if you haven’t already done so).  Add some of both and then stir.  Take a look at the ratio of stuffing to meat and see if you want more bacon.  Take a look at the green ratio and see if you want more parsley.  I like my stuffing to not be super meaty but have enough bacon that you can see it from time to time.  For the parsley side, I like enough that you can see it sprinkled throughout the stuffing.

14. Give it a taste!  Is it good?  Does it need salt or pepper?  I don’t have a heavy hand when it comes to seasoning, so I add some pepper, but I don’t usually find the need to add salt.  However, make it to your taste.

Viola!  You’ve just made my favorite stuffing!  You can eat it as is (which is the way I like it) or if you like your stuffing to be a bit drier and have some crust (or perhaps you added too much chicken stock), stick it in the oven at 350 degrees for a bit until it’s the right consistency for you. 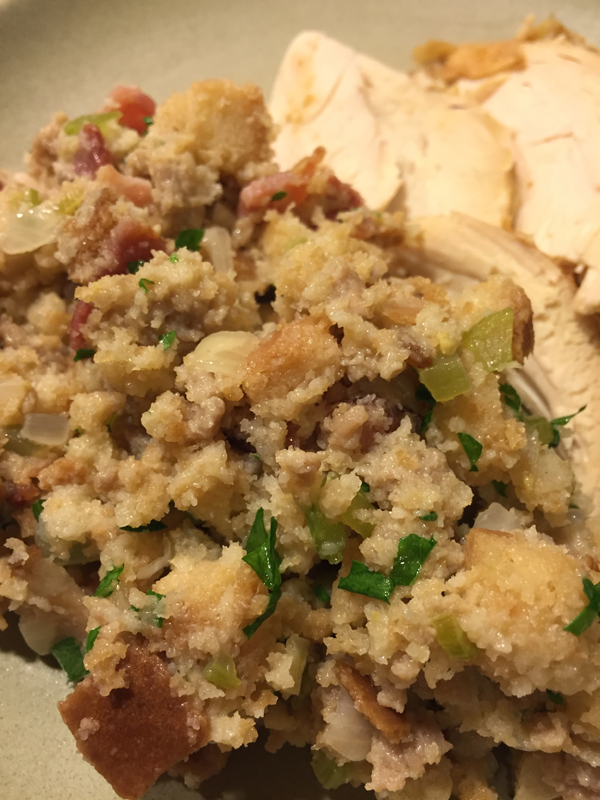 Ok, now for recipe number two.  I have a big sweet tooth, so come dessert time at Thanksgiving, you gotta have some awesome options.  You have to have pumpkin something at Thanksgiving and while I like pumpkin pie, I think this dessert is even better.  Pumpkin crunch is sweet, salty, pumpkiny, cakey, and crunchy.  The first time I had this dessert I was in love, it’s awesome.  And the best part?  It’s super easy to make, you can even make it the day before.

2. Melt your butter in the microwave and let it cool.

4. Sprinkle cake mix evenly over the top of the pumpkin mixture, and pat down to make it flat.

5. Sprinkle chopped pecans evenly over the cake mix.  You can do 1 cup if you aren’t a huge nut fan or if you like nuts, you can cover the whole top with it.

5. Drizzle the melted butter on top of the nuts.

7. Once it has cooled, put it in the refrigerator.  Serve it chilled and top it with whipped topping.

Super easy, right?  And it’s so yummy!  I admit that both of these recipes are not the healthiest (lots of butter), but they are dang tasty.  So, I say, live it up! 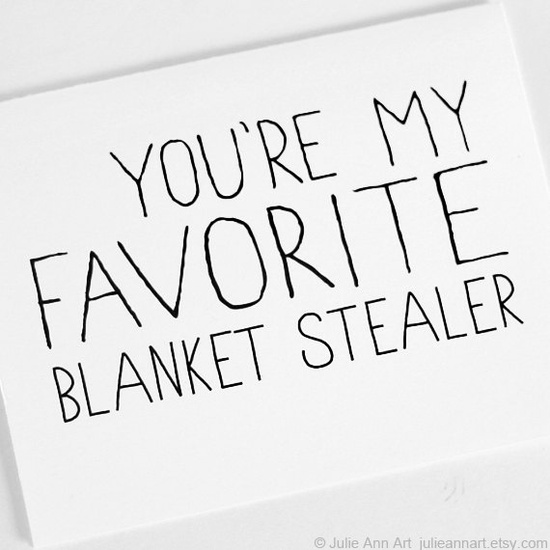 Pin of the Week: Real Love 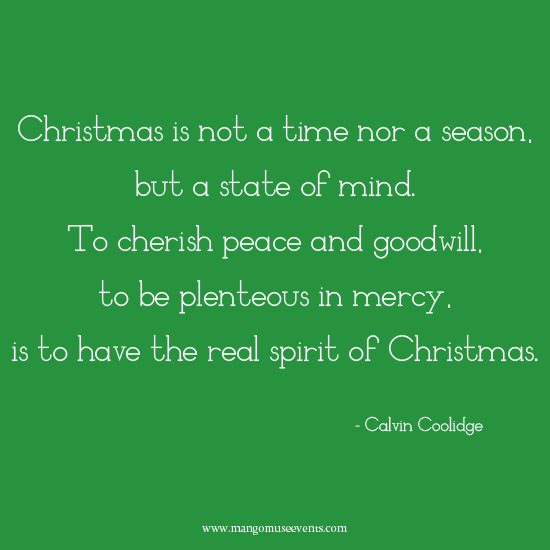 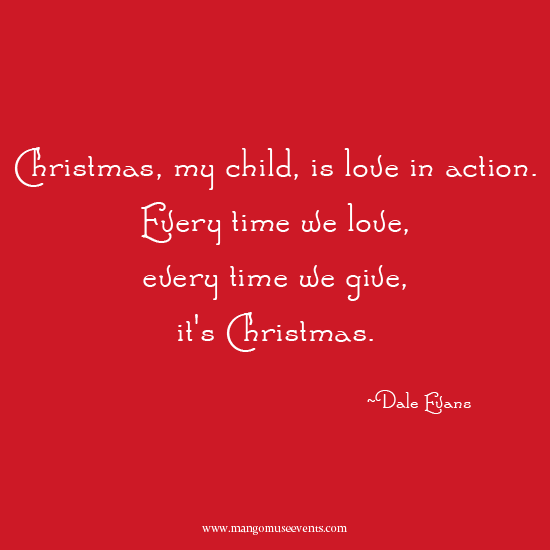 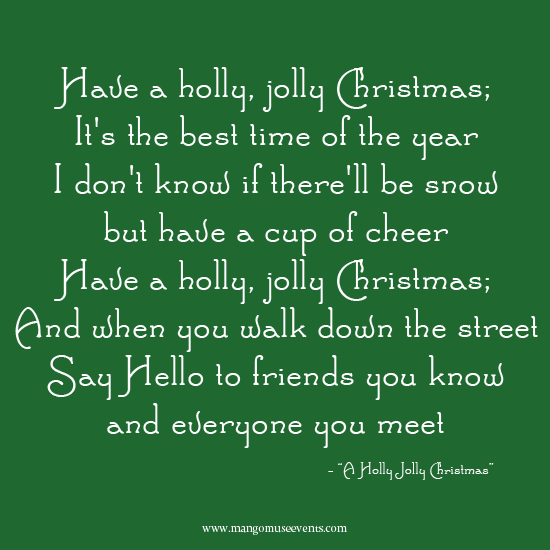 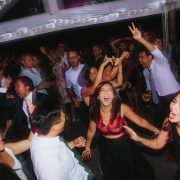 On the 7th Day of Joy, Shake Your Tail Feather
0 replies