I remember when I was young, I’d attend someone’s wedding and there would be some cousin or uncle who got stuck holding a camcorder at the back of the room, videotaping the ceremony and parts of the reception.  The poor person wouldn’t really get to enjoy the wedding and the end result would be a shaky, boring video with poor sound and picture quality.

Eventually, that evolved over time to couples hiring an actual videographer who would record the day and then make a same day edit (quick recap of the day thus far) to show during the reception.  When these first came out, I remember thinking how amazing they were because everything we were watching had just happened!  But after you saw one, every video looked the same with just a different bride and groom.

Videography (or Cinematography as it’s often called now) has come a long way since then and while it’s not yet the staple that photography is, it’s becoming more and more common.  So, you may ask, what has changed?  What makes a video or film now so popular? The answer lies in just the evolution of the name – videographers to cinematographers.  Cinematographers are no longer just recording an event, but taking that footage and creating a piece of art.  They are creating a film, a story that reflects not only the day but also the couple.  As I’ve said before in previous blog posts, every couple is different and thus every wedding should be treated differently.  Cinematographers now create each film to tell that couple’s story and the whole process becomes much more personal and personalized.  It’s about what they film, how they film it, how they edit it, and the soundtrack that results in a finished piece.   All you have to do is check out Stillmotion (a Canadian company that I’m thankful to be friends with) to see what I’m talking about.  Watch one of their films and you will understand what I’m trying to express in words.

Now the age-old question (or maybe not so old), to hire a videographer/cinematographer or not to? Different people will tell you different things. I personally really love video.  There is movement and sound that you just can’t get from photos.  This in no way means you should do away with photography.  I feel like they are complementary to each other and help each other to tell the story (your story) fully.  Photographs capture moments in time, moments you want to preserve and remember.  Photos are classic and timeless and remain in your family forever either framed on a wall or in an album.

With video, you can relive the events of the day in a way you can’t with photographs.  Video is the explanation to the photo, it explains the moments with more depth. Your videographer/cinematographer and photographer will each have a different artistic eye and you’ll get two different points of view of your special day, which is great because you’ll end up with so much more.

But, with all that being said, you have to prioritize how important video is to you.  Everyone is different and you have to assess how much you think you’ll watch and enjoy it. You have to judge whether your budget can accommodate both.  A good question to ask yourself is whether you think you’ll regret it down the road.  After you are married, will you be sad you don’t have a video?  You can’t redo your wedding, so if your answer is yes, then you should figure out a way to make sure you get the film you want.

One last note I have to mention. There are some amazing cinematographers out there, but I have to warn you that there are some horrible ones as well.  I recently watched a wedding video that just made me feel so sorry for the couple.  They paid a sizable amount for this company and the quality was bad and even worse, it was very boring.  I couldn’t get a feel for who the couple was at all. On top of that, they received their video a year later when their contract said it would be delivered in 3 months.  And there’s more!  When they finally got their video, they got sent the wrong video – it wasn’t even of them!

What I’m trying to say is, be careful when hiring a videographer/cinematographer.  Like with any vendor, there are true professionals and there are not.  Do your research and ask lots of questions. Just because your friend/sister/cousin hired a particular company does not necessarily mean you should hire them.  Make sure they are the right fit for you.  Make sure the style of their films is what you want.  Make sure they get who you are as a couple and talk to past clients to see if they were happy with the process and the end film.  In the same way that you don’t want to regret not having a film, you also don’t want to regret hiring the wrong company.

The End of Wedding Trends? 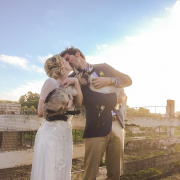 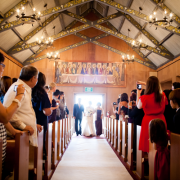 Wedding Wednesdays Q&A: What Is An Unplugged Wedding 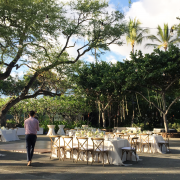 Wedding Wednesdays Q&A: Is a Wedding Videographer a Must Have?